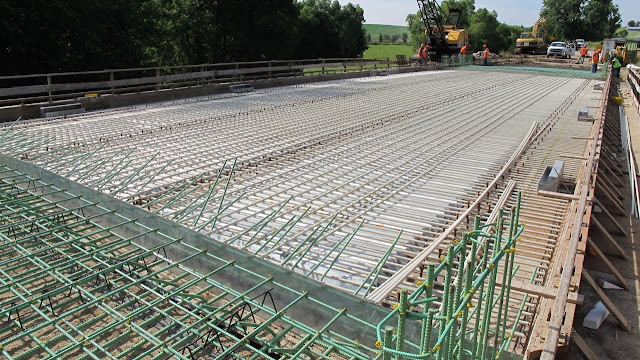 The Elkhorn North Bridge project required the re­decking of NDOR Bridge over an unnamed tributary of the North Branch of Papillion Creek and was a good opportunity to use a non­corrosive reinforcing material. The bridge deck was in need of repair and with other roadwork required near the village of Washington, NDOR decided to re­deck the bridge at the same time. NDOR chose to use Glass Fiber Reinforced Polymer (GFRP) rebar instead of traditional epoxy coated steel to extend the expected service life of the deck. GFRP reinforcing contains no steel and is not subject to corrosion by chlorides from the application of road salts and is a good alternative to epoxy coated reinforcing. What makes this project noteworthy is that this is the first bridge in Nebraska to utilize GFRP reinforcement.
The single span bridge is 96’ long and 32’­8” wide, with a 10 degree skew and was originally built in 1980. This is the first re­deck. It has a 8” thick deck supported by 42” deep welded plate girders at 9’­0” on center. The project used just over 11,000 lbs of #6 GFRP reinforcing, which when taking into account the reduced density (25%) as compared to steel. This would be equivalent in volume to a full truck load of

steel reinforcing. The cost of the bridge deck replacement was approximately $247,000. The bridge work


steel reinforcing. The cost of the bridge deck replacement was approximately $247,000. The bridge work began in early 2015 and was completed in the fall of 2015.
YOUTUBE VIDEO: GFRP BRIDGE 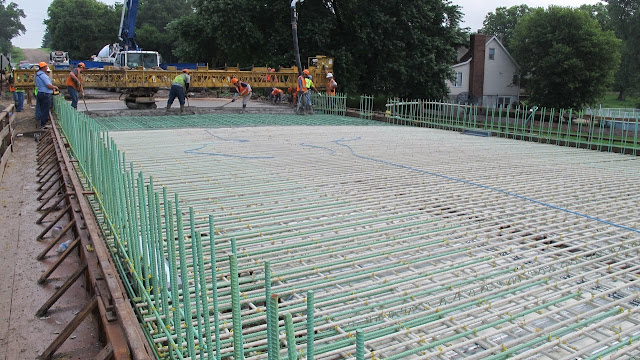